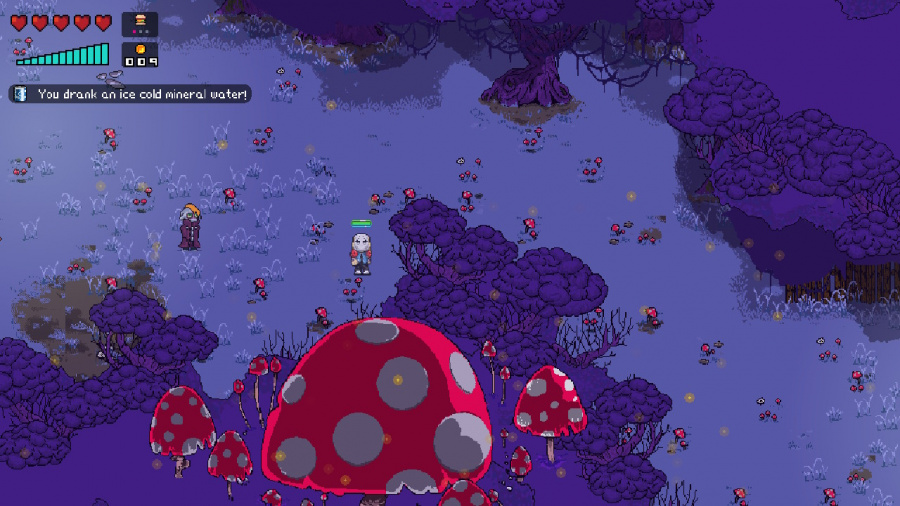 Nostalgia is as potent a force in modern video games as it is in cinema, TV and music. We all appreciate a dose of something warm and familiar in these scary times. But the trouble with such rose-tinted glasses is that they can often obscure a litany of flaws and a critical lack of imagination. Such is the case with Neon City Riders.

This fresh effort from Mexican indie developer Mecha Studios takes the Stranger Things series 3 approach to ’80s nostalgia. That is, it throws all of the references it can at the screen to see what sticks. Unfortunately, the results are similarly underwhelming. This is a game that looks and sounds the part, and gives the initial impression of sprawling ambition. But scrape away the retro-tinged veneer, and you’re left with a clumsily executed action-adventure game that lacks any real depth or nuance.

Our hockey mask-wearing hero is tasked with taking down four futuristic gang leaders, each occupying their own distinct corner of a bruised and battered sci-fi world. We picked up strong notes of Blade Runner, Back to the Future Part II, and even Futurama in the world design of Neon City Riders, and you’ll almost certainly add a bunch of other influences to that list. 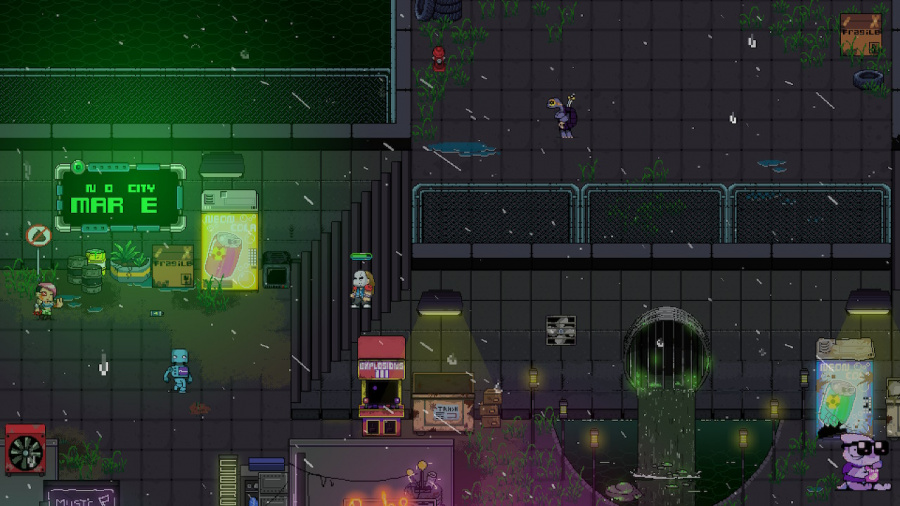 One thing that can’t be denied is that this game is superficially pretty. Any one scene in Neon City Riders would make for a great wallpaper for your laptop or phone, provided you dig pixel art. The game’s hub section, in particular, is packed full of incidental detail, its rain-slicked cyberpunk streets rendered in finely detailed pixel art. The soundtrack, too, is suitably packed with bleeping synths and looping melodies, as such things should be.

That all of this plays out over a semi-open world adventure only adds to the initial buzz. From a structural standpoint, we were put in mind of fellow top-down games like Zelda: Link to the Past and Hyper Light Drifter. Just what the retro game enthusiast ordered, then.

Well, not quite. Unfortunately, Neon City Rider’s undeniably strong initial impression soon gives way to disappointment. After your four main special abilities are introduced and just as swiftly whipped away, you’re cast blinking into a veritable slog of a freewheeling adventure filled with fetch quests, frustratingly exacting challenges, and a confounding lack of direction. 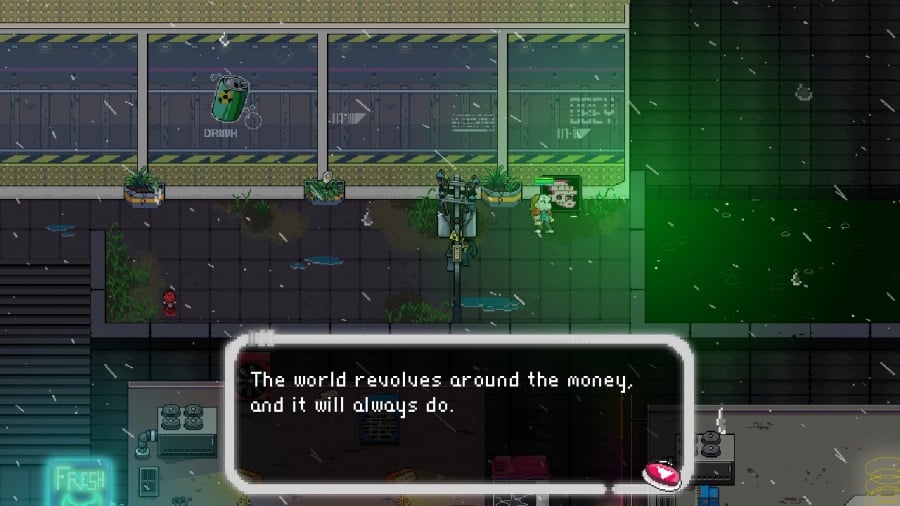 You’re encouraged to explore from the off, with several NPCs giving out conflicting advice on where you should go first. It’s meant as a bit of a running joke and a reference to the game’s open nature, but it speaks more to a lack of clear purpose. You’ll wander into areas littered with gated sections that you won’t be able to access due to the lack of one of those aforementioned abilities, and press through health-sapping rat-runs with only the vague notion that there’s going to be something worthwhile at the end.

Those abilities you’re after might enable you to burst through wooden box barriers, reveal a monochrome alternate reality (in practice revealing a bridge or changing the position of an obstruction), or redirect projectile attacks. Most fights, however, will involve avoiding your opponent’s unique attack pattern and wailing on them with your own melee move when they tire out. When several enemies bunch up, as they often do, it can be a tiresome case of giving them the Benny Hill treatment, throwing in the odd jab to whittle away at their health.

Puzzles take the form of a number of switch-flicking tasks, though they do at least vary in precise form from area to area. Whatever shape they take, these puzzles often frustrate through a combination of sub-par elements, from punishing enemy placement, repetitive maze-like layouts, snagging level furniture and unevenly spaced save points. 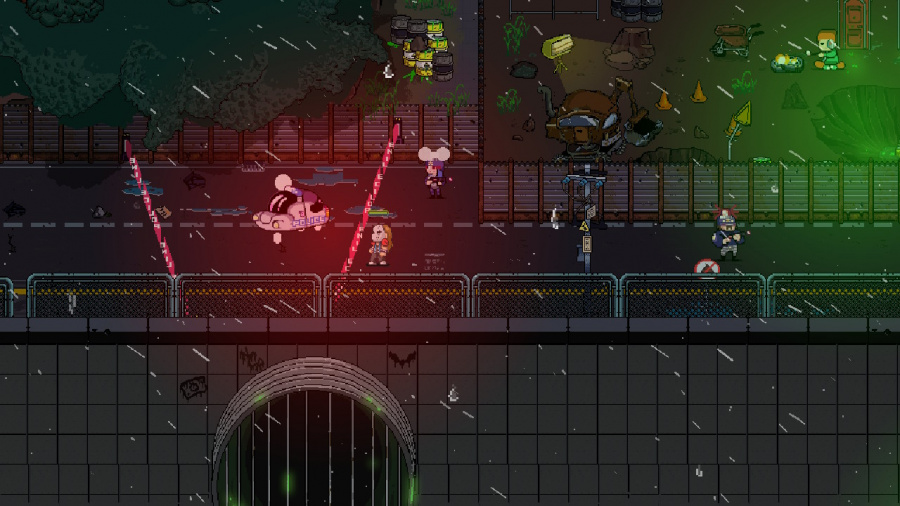 Meanwhile, what initially appears to be an extremely rich, detailed world soon reveals itself to be curiously flat and devoid of meaningful activities, with little to actually do beyond wander around looking for key NPCs and items. There are distinctively styled arcade machines that can’t be interacted with, vending machines filled with stuff that all does the same thing (restores your health), and numerous NPCs who spout uninteresting, poorly phrased inanities. Indeed, the writing in Neon City Riders is uniformly poor. We’re not sure if it’s a translation issue or simply a lack of attention, but there are countless grammatical errors that really serve to distract from the world-building.

There’s clearly a lot of love for the golden era of video games in Neon City Riders, and a fair amount of artistic talent to boot. But when you come down to exploring its neon-soaked world, it’s simply not a particularly cohesive or fun experience. This curious jumble of ’80s reference points that never quite coalesces into a convincing whole.

Neon City Riders promises an epic open-world action-adventure set in a vibrant ’80s sci-fi world, but its action and writing are far too flat and clunky to back up its initial promise. It looks and sounds a treat in places, but lacklustre execution makes for a punishing, repetitive and confounding experience. Pull away that admittedly amazing pixel-heavy packaging and you’ve got a game that fails to make a lasting impression in any meaningful manner.