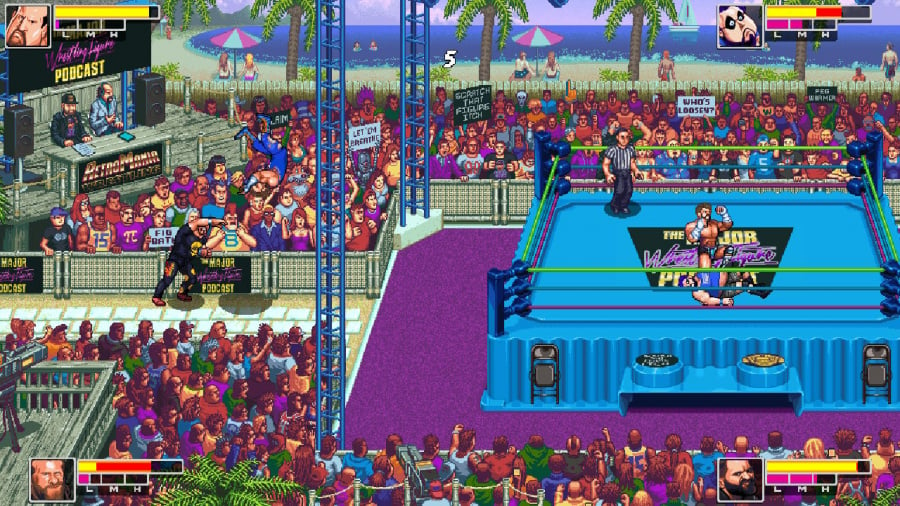 The search for a truly wonderful wrestling game on Switch has been one fraught with disappointments, and one that’s still yet to result in an absolute gem.

WWE 2K18 was such a shocking, glitch-riddled port that 2K Sports declined to bring the 2019 and 2020 offerings to Nintendo’s console. Its arcade-style spin-off WWE 2K Battlegrounds fared a little better in that it actually worked, but it was still a repetitive, shallow experience.

The closest we’ve come to brilliance on Switch so far is Wrestling Empire, an indie title that appears to be inspired by the N64 era (the best era for wrestling games) and is absolutely packed with content but is such a laughably buggy mess – deliberately so, to be fair – that it won’t be to the tastes of anyone who just wants a solid wrestling game.

Well, the 10-count has ended and the next competitor stepping into the ring for this Switch Royal Rumble is RetroMania Wrestling, the ‘official’ sequel to Technos’ classic 1991 arcade wrestling game WWF WrestleFest (in that developer Retrosoft reached an agreement with the game’s owner, not that anyone from Technos actually worked on this game). 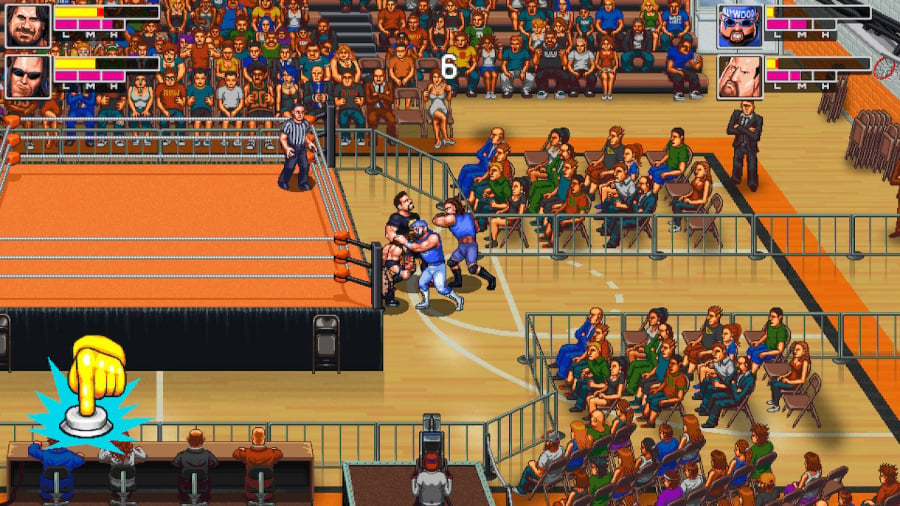 Anyone old enough to remember WrestleFest will be able to tell right away that RetroMania is an authentic facsimile, at least visually. The game does an impressive job of recreating the way that WrestleFest looked, right down to the way you see the competitors slowly walking down the entrance ramp before each fight. Once inside the ring everything looks like it should: moves in particular have just the right number of frames of animation to make it look like an authentic modern version of WrestleFest.

It may look the part, then, but it feels different, particularly when it comes to the grappling mechanic. WrestleFest was a bit of a button-basher and each wrestler only had four grapple moves that the game picked for you, but RetroMania’s grappling system is more timing-based like the Fire Pro Wrestling games. When both wrestlers get into a grapple, the aim is to press a button just as they both make contact. If you time it better than your opponent you’ll flash green and be in control of the move. If you do it at the same time, it’s button-bashing time.

It also shares Fire Pro’s use of light, medium and heavy grapple moves. Much like a real bout, it’s unrealistic to expect to storm in and start pulling off powerful slams right after the match starts, so at first the only grapples you’ll be able to successfully perform are weak ones (stronger ones will be reversed). Eventually your character’s momentum bar builds, enabling you to pull off medium and strong grapples. In this way the pace of the fight feels more like something you’d see on TV. Each grapple strength also has a variety of different moves, pulled off by holding a different direction as you press the button. 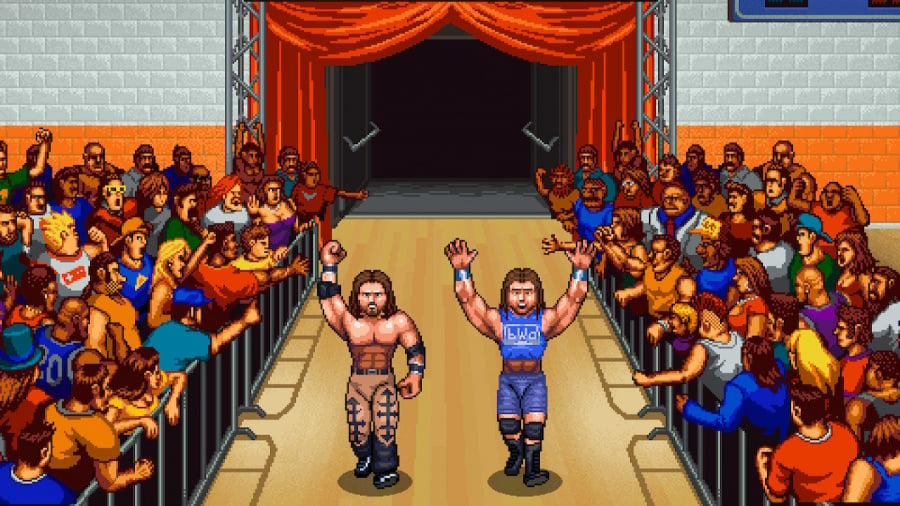 The grappling is great, then, but the other attacks leave a lot to be desired. Punches and kicks are tough to connect with, and running attacks need to be lined up absolutely perfectly or they won’t connect. This is much easier said than done, meaning you’ll find yourself avoiding running attacks altogether: a shame, because they’re among the most satisfying moves in the game on the rare occasions they do connect.

Another disappointment is the character roster, which only consists of 16 wrestlers. It’s a weird mix of indie, New Japan and Impact wrestlers, with the likes of Tommy Dreamer, Colt Cabana and the Blue World Order joined by NWA champ Nick Aldis and Impact’s Matt Cardona and Brian Myers (previously known in the WWE as Zack Ryder and Curt Hawkins). It’s even got the Road Warriors (aka the Legion of Doom) in there, because why not. They were the final bosses in WrestleFest, after all.

If you eat, drink, breathe, sleep and occasionally sneeze wrestling then this may well be a roster to get you excited, but your typical WWE (or even AEW) fan is going to struggle to get excited about the prospect of playing as Warhorse or the Blue Meanie. It just feels like they’ve dumped in whoever they could get to agree to be in it: 71-year-old Austin Idol and 62-year-old Nikita Koloff are hardly going to have most fans eagerly stuffing $25 in the eShop’s mouth, Ted DiBiase style. 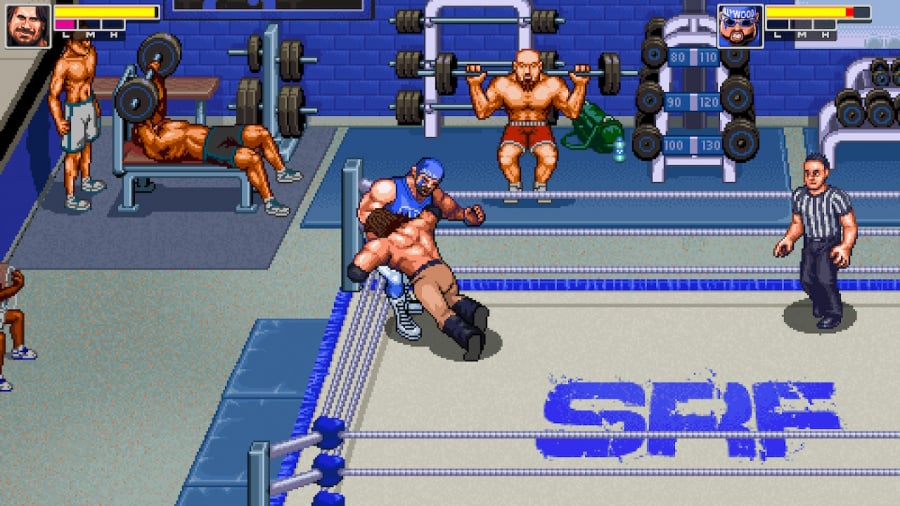 Oddly, there are actually more arenas than there are wrestlers, and these are brilliantly put together. Whether it’s Stevie Richards’ gym, Tommy Dreamer’s House of Hardcore arena, a WCW-inspired beach setting, the ECW-style ballroom or a match set in hell itself, the locations are varied and packed with detail, especially when the camera zooms out and you get a wide shot of everything. There’s even an arena based on Cardona and Myers’ Major Wrestling Figure Podcast, with a ring that looks exactly like the blue plastic WWF toy ring release in the early 90s and might just be the best thing in the game.

In terms of gameplay modes, there’s a Story mode where you play as Johnny Retro (aka John Morrison) as he tries to make a comeback from an injury. Starting off at Stevie Richards Fitness, you’re in charge of who to befriend and who to backstab thanks to the dialogue trees (though these have a habit of popping up at the end of lines, meaning we accidentally picked decisions when we thought we were skipping the previous line). This gives you a surprising amount of choice, but sadly the story is far too short to consider it the main reason for buying the game.

Other modes include 10 Pounds of Gold (a standard tournament where you try to reach Nick Aldis to win the NWA title), a ‘Retro Rumble’ (which is a 16-man Royal Rumble style match), and a straightforward Versus mode with a number of match types. The latter is versatile enough for some interesting bouts – an eight-man tag match in a blue WWF-style cage, anyone? – but is still a little limited compared to what Wrestling Empire and even the WWE 2K games have to offer in terms of match customisation. 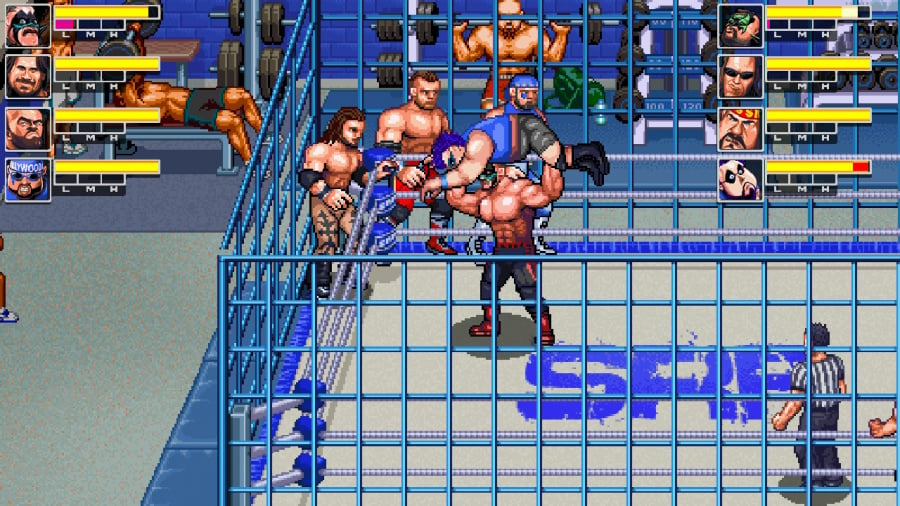 Ultimately, RetroMania Wrestling is as much about what it doesn’t have as what it does have. There’s no online multiplayer, no character creation, no enormous stars in the roster and no longevity in its single-player game modes. The developer has already said there’ll be more DLC wrestlers to come (the first pack includes Mr Hughes and Impact wrestlers James Storm and Chris Bey), and has also pledged to add more modes like a GM Mode if there’s enough interest. The latter could potentially make this a far more enticing prospect, but just now there’s not a lot on offer.

RetroMania Wrestling looks like WWF WrestleFest, plays (a bit) like Fire Pro and has a wide variety of entertaining arenas to play in. However, the tiny roster, lack of creation modes, lack of online and brief single-player experiences mean you’re really going to need to be interested in local multiplayer if you’re going to be playing this one for a long time. To give it the Cena test: it’s got our respect for going old-school and it’ll get loyalty from the cult following it’ll inevitably gain, but it still needs a bit more hustle before it’s the finished product, whereas just now it feels like The Prototype.

Random: Take a Nostalgic Virtual Walk With This Video of Every StreetPass Puzzle