Every weekend here at Nintendo Life we take a look at regional box art variants for retro video games and run a poll on which one is best. It’s a fun, light-hearted exercise; really just an excuse to look at fantastic (and some not-so-fantastic) old-school cover art, which is steadily taking a back seat to menu icons in the digital age.

Finding candidates that make for a good contrast between regions is not as easy as you might think. More often than not, two regions use near-identical art (typically North America and Europe) and for the past 10-15 years companies have tended to use the same art across regions. Still, it’s an odd thing to stumble on a candidate where each version features not only a totally different cover, but a totally difference licence.

The games seen above were made by Kemco, a developer and publisher probably most recognisable to Nintendo fans for publishing the Top Gear series. Kemco has a history that reaches back to the Famicom era and, as we’ll see, the company has form when it comes to switching sprites, re-skinning games between regions, and even borrowing an idea or two.

The story of how one game ended up with three different, beloved licences around the world starts way back in 1989 when the Crazy Castle series debuted on the NES with The Bugs Bunny Crazy Castle. This game birthed a substantial set of side-scrolling platformers where the player negotiates simple maze-like levels, nabbing items on the way and avoiding prowling baddies. The original game didn’t feature a jump button and, with its roaming enemies and collectibles, you might compare it to a side-on platforming version of Pac-Man. Progress is ‘saved’ via a password system that returns you to the level you last played.

The Crazy Castle series is a solid, inoffensive (if unremarkable) set of games with generic levels that could easily be spiced up with a sexy sprite or two, and Kemco (then known as Kotobuki System) was quick to realise this. The company re-purposed these games with different licences in different regions, depending on the rights they held in each territory. Bugs Bunny was already a replacement for another animated rabbit originally in the frame back in Japan…

From rabbit to wabbit

The Bugs Bunny Crazy Castle for NES was itself a straight sprite swap of the Famicom Disk System original Roger Rabbit. Kemco had acquired the Japanese game rights to Robert Zemeckis’ 1988 film Who Framed Roger Rabbit, which was produced by Disney-owned Touchstone Pictures. In the West, however, publisher LJN had acquired those rights and another game–an action platformer based more closely on the film–was developed by Rare in the UK (not the venerable developer’s finest work, it must be said). Wishing to release its Crazy Castle title abroad, Kemco resolved to purchase the rights to Looney Tunes characters from Warner Bros. and transform its headliner from a rabbit into a wabbit.

So far, so convoluted, but that wasn’t the final switch for the first Crazy Castle game, either. Kemco went down another licencee rabbit hole with a Game Boy port which became the Disney-licensed Mickey Mouse in Japan. In the West, the Game Boy version retained the Bugs branding due to Capcom having the international rights to Disney properties (resulting in classics suck as DuckTales and Chip ‘N’ Dale’s Rescue Rangers). Jeremy Parish’s excellent Game Boy World video (above) concentrates on that Game Boy iteration of The Bugs Bunny Crazy Castle–apparently the first licensed game ever to come to the handheld–but also compares the other versions, so give that a watch if you’re curious.

From the beginning, then, the Crazy Castle series was a tangled web that snagged some of the most animated popular characters ever created, and there was plenty more confusion to come. 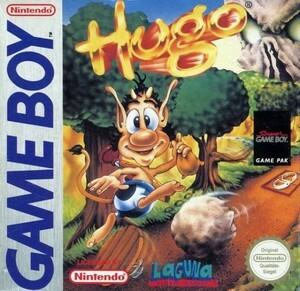 He’s kind of a big deal, you know.

Kemco’s approach to getting maximum mileage from its rather basic game design continued unabated with the 1991 Game Boy sequel known in North America as The Bugs Bunny Crazy Castle 2. Mickey Mouse once again took the reins in the Japanese version (named, quite logically, Mickey Mouse II). Unfortunately, things would get complicated in Europe where two versions of the game released: one starred Mickey Mouse (although remember that the first game with Disney’s mascot was Japan-only, so in Europe this sequel was simply called Mickey Mouse).

You’d be forgiven for thinking that the other European version of this game would star Bugs again. You would, of course, be wrong. Instead, Laguna Video Games threw ITE’s Scandinavian troll and children’s property Hugo into Crazy Castle 2, retitled it Hugo, and yet another licence got stirred into the Crazy Castle mix.

Apparently, Hugo, a Danish character and multimedia franchise, has an impressive catalogue of games, although we confess to never having heard of him.

The next entry in the Crazy Castle series jettisoned the established gameplay in favour of a more conventional 2D platformer that included the radical addition of a jump. In 1992 Mickey Mouse III: Dream Balloon released for Famicom in Japan, although for the North American NES market the game was altered to star Kemco’s own character Kid Klown and released the following year as Kid Klown in Night Mayor World. This game never saw the light of day in Europe, presumably because they were still confounded by the whole Mickey/Hugo situation.

Kid Klown would return to the series in the future and also star in other spin-offs, including an isometric platformer for SNES called Kid Klown in Crazy Chase. However, the Klown sat out the next couple of Crazy Castle games and Kemco enlisted new licences for the fourth game in the series.

Evidently feeling that its licencee portfolio needed diversifying, Kemco added not one, but two totally new famous faces into the mix for the next entry, along with its ongoing agreement with the House of Mouse in Japan.

Japanese Game Boy owners received Mickey Mouse IV: Mahō no Labyrinth (above). However, in the US Kemco had got its hands on the rights to The Real Ghostbusters (by joining forces with Activision, it seems) and decided to switch out Mickey Mouse for Peter Venkman.

The Ghostbusters IP rights were a tangled mess before Kemco joined the party, and it was this which led to two NES versions of Ghostbusters II: the HAL Laboratory-developed good one with ‘New’ added to the title which never released in the US, and the horrible Activision one inflicted on Stateside fans. US gamers did get the decent Game Boy version of HAL’s title, though, which hopefully made up for Kemco’s lacklustre effort.

In Europe, it was decided that the Monday-hatin’, lasagne-lovin’ Garfield was the cat to host the fourth Crazy Castle title, and the game got yet another sprite swap in the retitled Garfield’s Labyrinth. Make no mistake, despite appearances it’s the same painfully average game.

Film and animation buffs will no doubt enjoy the serendipity of his unusual ‘crossover’; actor Lorenzo Music provided the dulcet tones of both Garfield and Peter Venkman in animated form, while Bill Murray played both characters on the silver screen.

If this situation wasn’t already murky enough, the confusion from this confluence of characters is compounded thanks to various elements and level designs in this Mickey / Ghostbusters / Garfield game being lifted wholesale from a totally unrelated title – 1991’s P.P. Hammer and his Pneumatic Weapon for Amiga and Commodore 64. If you watch the opening section of the videos above, you’ll see that the broom-like object Mickey and Garfield pick up is actually a jackhammer much like P.P.’s (Venkman doesn’t need one as he uses his proton pack to blast holes in the ground).

Surely this was just another acquisition Kemco put to use in typically economic fashion, no? Unfortunately not, according to the developer of P.P. Hammer, Gunnar Lieder. In a tweet on the topic several years ago, he confirmed there was no collaboration with Kemco whatsoever:

There is no link @BenPaddon . These game(s) are a complete ripoff. We had never any relationship or even a contact to Kemko— Gunnar Lieder (@GunnarLi) June 5, 2015

So, a cloud of suspicion now surrounds this impenetrable tangle of world-famous characters trapped in Kemco’s Crazy Castle. While it seems none of the other games ‘borrowed’ elements from elsewhere, the series certainly wasn’t through with licence-hopping.

Kemco kept things relatively simple for the follow-up, and after acquiring the rights to release a Mickey Mouse game in the US, Mickey Mouse: Magic Wands! was a straightforward localisation of 1993’s Mickey Mouse V: Mahou no Stick, albeit one which released five years after the Japanese version with Super Game Boy support.

The game also saw release around Europe, although oddly with the Roman ‘V’ still attached. Presumably, European gamers were supposed to infer the ‘V’ referred to a number of magic wands rather than the fifth entry in a series they had only seen once before with Mickey Mouse at the helm.

The return of Bugs Bunny, and one final licence… 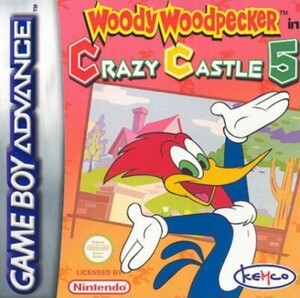 One more, for good measure.

Kemco rolled out Kid Klown again for the Japanese Game Boy title Soreike!! Kid: Go! Go! Kid in 1997, although that game received a Game Boy Color makeover two years later and returned with Bugs’ Looney Tunes crew as Bugs Bunny: Crazy Castle 3 in all territories, followed by Bugs Bunny in Crazy Castle 4 for GBC one year after that.

For the final console game in the series on Game Boy Advance, Kemco turned to one more licence after gaining the rights to Universal Studios properties (they also published the quite terrible Universal Studios Theme Parks Adventure on GameCube).

Beyond a mobile game in 2004, we haven’t heard from the Crazy Castle series since Woody Woodpecker’s stewardship. Looking back over the games, it’s a strange and convoluted web, for sure, and probably not one worth playing through unless you’re a die-hard Crazy Castle fan.

Still, it’s tough to name another series with quite such a complex history, certainly not involving luminaries from the world of animation – the Wonder Boy / Adventure Island melange didn’t mix in famous licences like this. The games themselves might not be classics, but you can’t help but marvel at Kemco’s licence-wrangling around the basic Crazy Castle premise.

Let us know below if you’ve got any of the above games in your collection.