My first impression of Wasteland 3 was “shit, that’s quite graphic”. As a newbie to the franchise, I wasn’t expecting such a gory, brutal introduction to inXile Entertainment’s latest project and it sure as hell didn’t let up during the preview.

Wasteland 3 is a true sequel to Wasteland 2, with you playing as the remaining survivors of one of the Rangers’ groups, Team November. The Rangers were contacted by someone called The Patriarch, a dude who claims to rule Colorado, though that’s heavily contested. He offers you resources, which is as good a bargaining chip as any at the end of the world, in return for your services, namely killing his three children who want to claim the land for themselves. It’s then up to you to fight your way through the cold wastes and battle it out against the Dorsey’s, a group of animal skull wearing hillbillies who love killing.

The combat in Wasteland 3 borders on comedic brutality, as heads explode and blood splats around the area each time you land a shot but there’s always a witty quip to accompany it. During the demo, I got to see one Dorsey dancing in human blood, another with his head blown clean off during a dialogue cutscene and a judge slowly executing Dorsey’s and a few others by exposure with zero remorse. 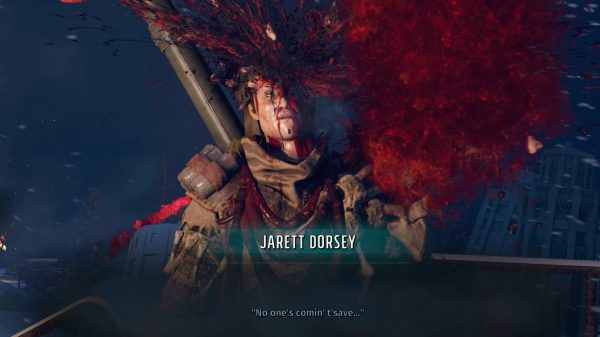 The language used to describe the Dorsey clan and the torture they and Partiarch’s children inflict on the population of Colorado is disturbing, to say the least, but with a Borderlands-esque level of humour over the top. It won’t traumatise you in any way, but it’s definitely violent enough to make you gasp.

You can choose from a roster of starter characters, each with a unique backstory, skills and quirks, or create your own character for a more personalised experience. There are a wealth of skills and attributes to choose, from the aptly named Sneaky Shit to Nerd Stuff, Animal Whisperer and Mechanics.

If you choose Animal Whisperer, you’ll be able to recruit animals to your squad who will boost your stats and fight alongside you later on. During the preview, we got to meet Major Tomcat, a cat who wore a cool hat and rocked a little bandana. I’m pleased to confirm that you can pat the cat in Wasteland 3, as well as charm dogs and talk to chickens. Rabbits will also run past you screaming if all of this wasn’t surreal enough. 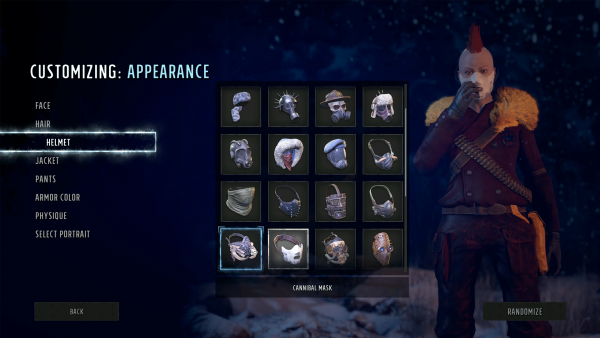 Wasteland 3 adopts the same turn-based strategy combat from Wasteland 2, where you’ll need to deal in percentages to line up successful shots, utilise cover effectively and generally avoid big robots that are definitely going to fuck you up. If you’ve played its predecessor or the likes of XCOM 2, you’ll get to grips with the combat system fast enough, though it’s equally easy for amateurs to grasp. Enemy perception rings help you plot a path around them if you don’t fancy a fight or want to set up a bigger squad more effectively than just wandering in all guns blazing. 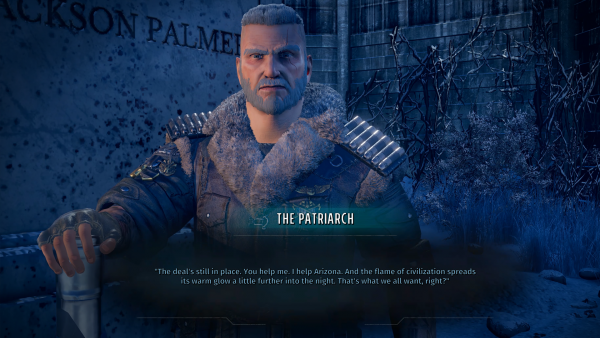 It goes without saying that Wasteland 3 benefited well after inXile’s acquisition by Microsoft. Originally funded from Fig from both fans and investors, the resource injection from Microsoft allowed the company to fully voice Wasteland 3. Some dialogue comes as part of a cutscene and you’ll be one-on-one with certain characters, while others are top-down during exploration. You’ll still be able to make choices and influence what happens in each scenario, though the one-on-one chats do carry a little more weight.

The dialogue and choice system in Wasteland 3 is massive and not to be underestimated – the repercussions of every decision you make, no matter how small, will be clear to see, though some won’t become obvious until later in the game. There are also limitations to your choices; those who played the Alpha will remember a game over screen if you disobeyed Patriarch and killed one of his children, so you can only be so much of a dick.

Depending on your skills and attributes, there will be some things you can’t access, such as locked doors or computers, and certain dialogue options will be greyed out as you don’t have a high enough Hard Ass ranking. Theses smaller omissions of choice can be frustrating, especially when there might be something cool behind closed doors.

One of the first morality-based choices involves either convincing one of the Dorsey’s not to kill a colleague or, if you don’t have the perk to talk her down, kill her immediately. While it might be tempting to play the good guy and talk her down, she’ll immediately run off and inform her pals that you’re approaching and will join the ensuing fight. This eliminates any chance to quietly ambush them, so you might as well just shoot her in the face and fuck off. 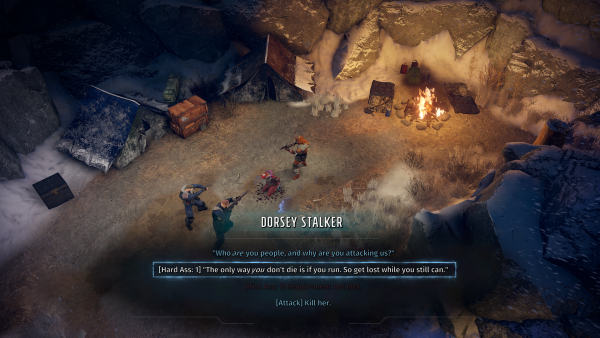 Later, there’s the option to save a boy from execution and recruit him into your team, but it’s not clear whether every person you “save” will actually be useful, whether they’ll betray you or just be a massive pain in the arse at a later time. Violence is inherently in the system in Wasteland 3, so you might as well be a ruthless killing machine that loves talking to animals.

Co-op play is recommended for Wasteland 3, as you and a friend can team up and experience the story together. If your partner can’t come online, you’ll be able to carry on making decisions and exploring till a certain point. While it would be prudent to have one of you be the morality meter while the other acts as a combat specialist, it’s equally tempting to be a dick and make some less than savoury decisions when your partner isn’t able to play.

There’s no multiplayer mode as such, though the co-op mode makes completing the story a real team effort. It’s up to you whether to go it alone with your pal or recruit everyone you can get your hands on and take a posse with you wherever you go, or just take turns at deliberately fucking your story up when your partner is away because hey, what are pals for? 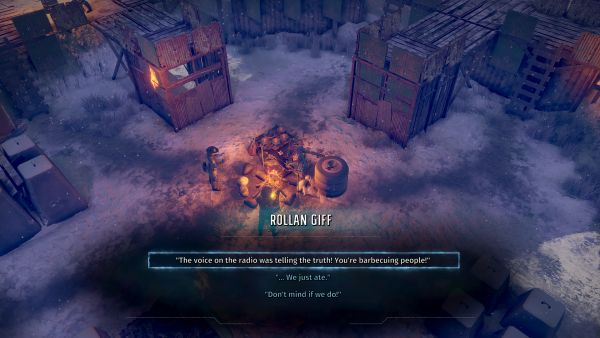 Wasteland 3 promises to be just as long as Wasteland 2, which was around the 80-hour mark all in. It’s still a point-and-click adventure of sorts and there’s extensive loot to be gathered which can improve your arsenal or be sold to finance your group’s excursions. There should be a content update post-launch and some possible DLC in the works, though inXile is remaining tight-lipped about it so far.

At a time where it feels like the only two quarantine video game options are either the lovely fun of Animal Crossing or the hellscape of Doom Eternal, Wasteland 3 feels like a silly mishmash of both that should make your isolation a little more enjoyable.

Backers of Wasteland 3 on Fig will be able to take part in the Backer’s Beta on March 17 from 4 pm GMT/ 12 pm ET/ 9 am PT, though Alpha players won’t receive a new key and will instead be able to log back into the game. I strongly suggest that you watch out for Major Tomcat and join me in my pursuit to be the Steve Irwin of Wasteland 3.

Mass Effect Legendary Edition's Mako has been improved, but you can disable the new handling